When you buy a home in Florida, the first holiday season may leave you wondering about a lot of things. Here are some thoughts to know about Christmas in Florida.

First: Christmas - for most Americans - is associated with cold weather, and most Americans don’t associate cold weather with Florida.  But, December is one of the coldest months in Florida - average annual temperature is a high of 65 (average - Tallahassee is colder, Miami warmer!), but Palm Coast is warmer with the average at 74.  For many, that first holiday season in Florida can be a little unsettling - no snow and no freezing temperatures, but after a couple years, a high of 74 with morning lows of 49 will have you dragging out the scarves and sweaters! If you are a native Floridian (of which only 36% of the state’s residents are), that morning low is going to feel downright freezing!

Second:  There are opportunities to experience a little of the snow and ice magic.  When you live a stone’s throw from Orlando, one opportunity is to visit the Gaylord Palms.  From mid-November through early January, they offer a chance to view the classic holiday movie, A Christmas Story, through ice sculptures and scenes from the movie...using 2,000,000 pounds of ice!  There are also eight lanes of snow tubing to enjoy….all for a fee, of course! In addition, the town of Celebration, Florida, has snow fall nightly at 6, 7, 8, and 9 pm.  And, they feature an outdoor ice skating rink - also at an additional charge.  Ice skating rinks are another way to enjoy the sensation of winter holidays with Orlando RDV Sportsplex ranking high up on this list, as does the Jacksonville Ice & Sportsplex.

Third: Poinsettias!  These beautiful plants that grace many homes, hotels, restaurants, and businesses in northern climes come from Mexico and work well with the Florida weather.  I group mine in a large pot on the front steps and plant others around the property, so the red color really livens up the appearance of the garden. Unless there is a really hard frost, the plants make it through the winter fine and flourish through the Florida spring, summer, and fall, throwing out the red bracts just in time for the next Christmas.

Fourth: Holiday parades - there are a lot of Santa parades to chose from.  Flagler County offers two. One is the Flagler Beach parade which is usually mid-day the first weekend in December.  Residents march in the parade - local fitness groups, high school groups, “ Little Miss” Flaglers, and many other floats  entertain spectators. The highlight of the event, though, is Santa Claus parachuting in from over the ocean onto the beach near the historic Flagler Pier. There is a second parade, The Starlight Parade, usually the second weekend in December in the evening near the town center.  It features over 80 floats and lots and lots of lights….and, of course, Santa Claus. 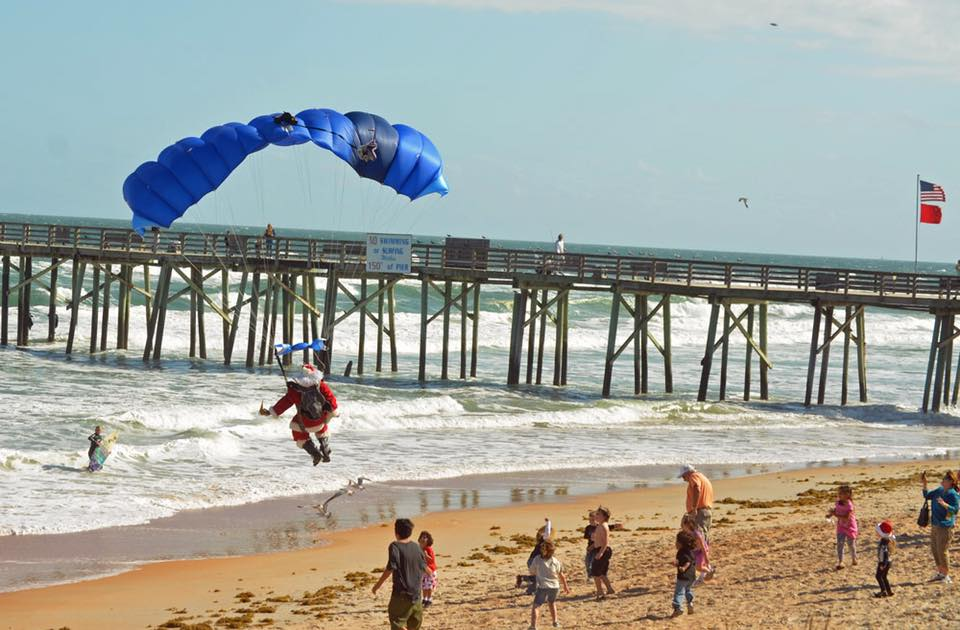 Fifth: Boat parades!  This year is the 36th iteration of the Palm Coast boat parade.  People line the ICW for miles to cheer on the boats as they pass, bringing with them chairs, snacks, and libations.   Those who have homes along the ICW host parties and crowd the docks and piers. In 2017, over 40 boats participated - from the small 18 foot boats to much larger 50+ foot boats.  Each one is decked out with lights, Santas, and music. Captain and crew usually have on Santa hats and the Flagler County Sheriff’s office escorts the parade from Cimarron Basin to the end of Grand Haven. The boats leave Cimarron Basin at 6pm usually the third Saturday in December.  The flotilla is a sight to see. 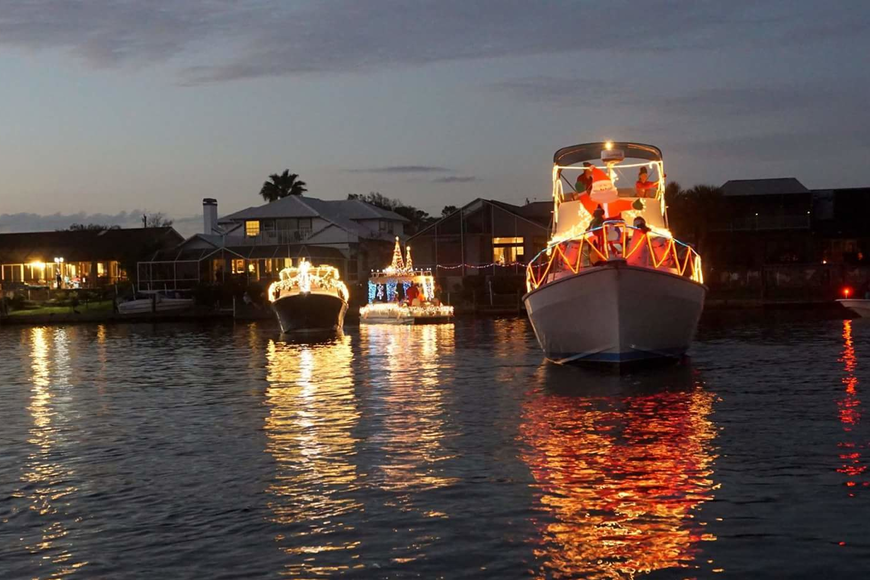 So, if you want the flavor of a northern holiday season, you can still get it in Florida with snow (fake!) and ice, but you can also enjoy the beauty of poinsettias, parachuting Santas, and lots and lots of lights - both on land and on sea.